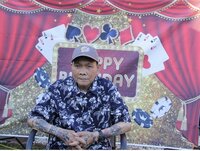 Eleorife 'Bhoy' Eleccion peacefully passed away on December 21st, 2021 at the age of 70 after a courageous battle with cancer surrounded by his loved ones.

Eleorife is survived by his loving wife, Gleceria, his children Lory Mendoza, Lovelyn Lagudas, Leoriben Eleccion, Leslyn Francisco, Leonil Eleccion, and Loida Ferolino. He is also survived by his son and daughter in-laws and 12 grandchildren. He leaves behind his sisters, Paz Velasquez, Prescilla Paskiang, Fina Rabaja, and Tina Tamayo along with his brother in laws, numerous nieces, nephews, and other loving friends and family.

Visitation will be held on Monday, December 27th from 1-5pm at Healey Mortuary Chapel with a Rosary at 4pm.

Funeral service will be held on Wednesday, December 29th at 10am at St. Mary's Church in Salinas, CA. Burial will follow at Garden of Memories, Salinas, CA.