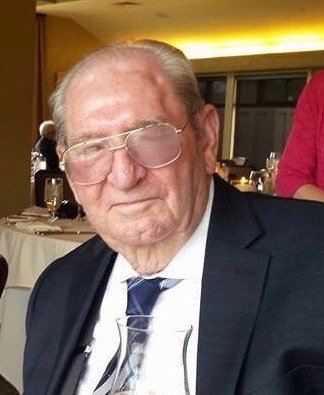 Alfred Eugene Hahn Sr., retired U.S. Army First Sergeant, passed away on March 24, 2020, at the age of 94 in Salinas, California.  He is preceded in death by his son, Alfred Eugene Hahn Jr. and a grandson, Charles Crow Jr.  He is survived by his wife, Margaret, three daughters and their husbands; Diane and Charles Crow, Emma Jean and Nick Araujo, Bonnie Jean and Garth Young, and daughter-in-law Diana Hahn.  He also left behind eight grandchildren; Cathy Gribas, Mary Papaleo, Nicole Blume, David, Charlie and Sharon Hahn, William and Gavan Young, and 17 great grandchildren.
Retired from the U.S. Army after 25 years of dedicated service, Alfred served in World War II, the Korean War and during the Viet Nam Conflict.  He was the recipient of many medals and honors.  He will always be remembered as a great patriot who deeply loved his country. After his retirement, he worked for the Federal Civil Service and was an entrepreneur in the construction field.
Alfred was very involved and active in the Masonic and Shriner world. He was a sixty-three year Honorary Member of Lodge 374, Jackson, South Carolina Worshipful Grand Lodge of Ancient Free Masons where he became a member on August 13, 1956. He was also a member of Lodge 395 Blythewood Grand Lodge of South Carolina, Asiya Shriners International, and Scottish Rite of Freemasonry Valley of San Jose Orient of California.
Alfred and his wife, Margaret, were proud of their involvement with the Prunedale Senior Center where they dedicated many hours of service to its programs and activities.
A husband, father, grandfather, and great grandfather, Al was an inspiration to all.  He had a strong, determined spirit and always gave his best to every endeavor and trial he encountered.  He loved being involved in all aspects of life. He will truly be missed by his family and friends who loved him dearly. Rest in peace Al. You’ve given of yourself to this world for ninety-four years, it’s your time to rest.

To send flowers to the family or plant a tree in memory of Alfred Hahn Sr., please visit Tribute Store

Share Your Memory of
Alfred
Upload Your Memory View All Memories
Be the first to upload a memory!
Share A Memory
Send Flowers
Plant a Tree