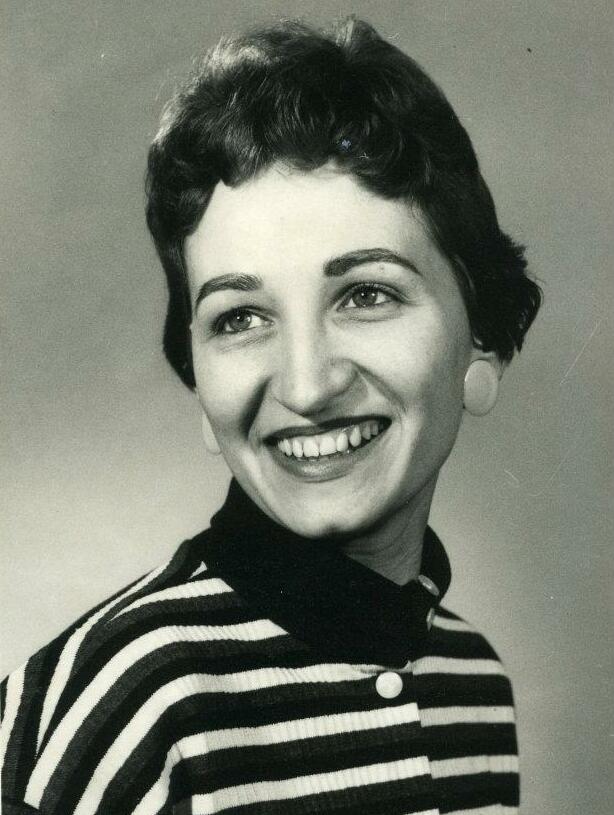 Dodie was born on 3/16/33 to the late Mary Eve Kuta & Adam Aloysius Kuta, both of whose parents hailed from Tarnov, Poland.  Mary and Adam were farmers in Loup City, Nebraska.  So many farm stories will be cherished, including the infamous very young Marian falling into the horse’s trough and Dodie, Rita & cousin Marjorie coming unglued.  Dodie & Marjorie ran for help, Rita stayed with Marian, and the whole gang was reprimanded!  Also, Marian, Rita, Dick and Dodie riding on the back of sweet Sadie the horse, until they all fell off.  She was Loup City High School Class of 1950 with cousin Marjorie Golus Whalen; & boarded “in town.”  After a few jobs including US Rubber where she met lifelong friend Phyllis “Sandy” Olsta, she and dear friend Charlotte (Trenkle) ventured out in separate cars to California, losing each other as they approached SF, but reconnecting at Dr. Natanskin’s office, their only CA contact; nurse Charlotte’s future employer. Dodie & Charlotte resided in Burlingame and enjoyed travel & dancing & the single life with the nearby “634” nurse girlfriends including dear friend Mary Hoagland.   Dodie met Richard “Rick” Dickerson at a UAL Mainliner Club party where at United Airlines she worked in administration and he was a mechanical engineer.  The lovebirds wed in 1965 & settled in Belmont.  They enjoyed piano bars & Broadway shows & the city scene in SF & remodeling their Belmont home by hand. Dodie got Rick to dance, her absolute passion in life.  She was the most graceful ballroom dancer & even taught Arthur Miller Dance.  They snow skied their way through Austria, Colorado (with Marian & late Bob) and to CA’s Lake Tahoe region. They both turned in their snazzy convertibles for Humphrey the”huge!” yellow Ford station wagon after Tami Sue (1967) and Jeffrey Scott (1971) arrived.   They passionately loved flight travel, snow and water skiing on the boat Rick made.  A regular in the IHM melodrama from its onset, Dodie high-kicked and crooned in the “Olios” many dance numbers.  Wanderlusts, they bought a camper when Tami was four, Jeff one but soon Rick was diagnosed with cancer and died from a brain tumor in Oct 1973.  Dodie raised Tami & Jeff alone working in real estate and later retiring from the county of SM.  She impacted on her kids the importance and value of education, but also piano & violin lessons, her love of musical theatre, participation in sports, and regular snow skiing excursions as a trio & also with friends such as the Uldrick’s from IHM church.  Close to her heart was her love for her family.  Many road trips across the US were made with her kids and mother Mary to visit close and distant relatives, accompanied by the hypnotizing creek-creek of the styrofoam cooler in the very back of the Ford.  She was before her time a custodian for the environment at home ~ she recycled everything, and when the big draught came in the 1970’s, she make-shifted devices to reuse water from the bath and washer to keep her grass green for us kids. An avid Democrat member & supporter, she also volunteered at the polls for many years.

A favourite pastime was making jam from her plums & apricots.   Her wanderlust introduced her to Poland and all over Europe, Australia, Alaska, and most states in the US.  A devoted fan of the 49ers, she also loyally cheered for NB Cornhuskers, and, well, any Tom Brady team (Tom attended Jeff’s High School, Junipero Serra).  She loved rendezvousing with Tami on work trips to her hotel collection she managed in the 90’s.  She adored continuing show biz with IHM’s more cultivated “Lils” for years.  With her constant companion Lil, she enjoyed friendship & laughs, more travel and adventures.  They were inseparable, even had the same haircut (fashioned at sweet friend Soyla’s)!  Smitten with Johnny Cash, at two of his concerts she attended back to back; he noticed her up front and tossed her his treasured “Harmonici.”

In 2004, Dodie moved to SLO, CA to be with family.  Called Gwamma or Nana, she reveled in her grandchildren, where her heart was light.  Loving and silly, she sang to them such ditties as “Does Eat Oats,” “Abba Dabba Dabba,” and “Show Me The Way To Go Home” in funny voices.  She lovingly bottle fed & later played games and loved attended their sporting events.

After a 10 month tough fight with CHF, she was called home to her parents, dear husband, Rick & 5 siblings ~ Lynne Rozemairek, Jack Kuta, Ernie Kuta, Dick Kuta & Georgia Rather on February 6, 2022, with Tami & Jeff holding her hands.  She was 88.  She is survived by 3 sisters; Rita Mendyk, Marian Novak & Kathy Klaes; 2 children Tami and Jeff; & 4 Grandchildren Max, Matthew, Christopher & Christian.  She will be sorely missed by us & the many dance floors that she graced.

“When a child is born so is a grandmother”

In lieu of flowers, a donation in her name may be made to The Democratic National Party

To send flowers to the family or plant a tree in memory of Dolores "Dodie" Dickerson, please visit Tribute Store

Share Your Memory of
Dolores "Dodie"
Upload Your Memory View All Memories
Be the first to upload a memory!
Share A Memory
Send Flowers
Plant a Tree