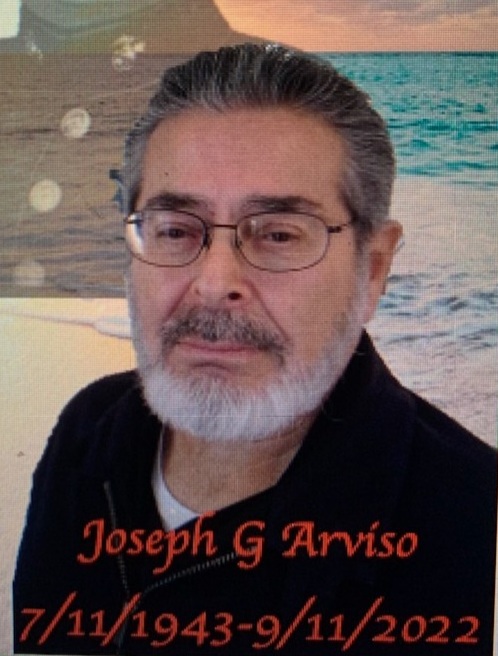 Joseph G Arviso passed away on September 11, 2022.  Joseph was born and raised in Salinas and attended Salinas area schools where he graduated from Monterey High School. After graduation Joe enlisted in the Marine Corp. He served his country during the Vietnam Conflict. Joe earned the rank of Sargeant and he was a Rifle Expert and a certified battlefield photographer. He continued to serve his country as a reservist and a member of the Marine Corp League Detachment #711. Joe also participated in the organization of several Marine sponsored events, such as the San Ardo Christmas program, Toys for Tots, clothing and food drives for veterans, etc. After proudly serving his country, Joe worked briefly at Firestone and later was employed with Pacific Bell. Joseph started out as a Pac Bell pole man and worked his way to the IT department. He flew around the country giving seminars on the newest technologies of the time. Joseph loved to travel and visited many national monuments, his favorite place being Hawaii.

Joe was an avid hunter and fisherman and went on many adventures with his cousin Barney Trinidad. He lived next door to his brother Mac and sister-in-law Gerry, whom he loved and spent a lot time with. He spoiled his nieces and nephew with time and love; they in turn kept him busy playing board games, having movie night with popcorn, playing video games, hopscotch, jump rope. jacks and setting up the electric train and race car tracks with them. He even once inflated a 12 man raft in his living room so his nieces could jump around in it.

An extra special loving thank you to Regina Santa Cruz, Maria and Selena Ultreras and Maria Josefina "Mia" Padilla for providing the loving and caring assistance in order for him to be surrounded by his loved ones in his last few years; along with Knuckle Joe's God-daughter Rose; for not leaving his side in last few days.

Joseph is survived by his brothers Mac Coronado, John Nunez-Scarpello, Ray Nunez and his loving nieces Gigi Ortiz, Maxine Aguilar, Rose Coronado, Regina Santa Cruz and nephew James Coronado, along with all of their children and grandchildren. Joseph will be truly missed and remembered. We love you forever Uncle Joe.

To send flowers to the family or plant a tree in memory of Joseph Arviso, please visit Tribute Store

Share Your Memory of
Joseph
Upload Your Memory View All Memories
Be the first to upload a memory!
Share A Memory
Send Flowers
Plant a Tree